There are always going to be people out there blaming women for the bad behavior of men: this story from Twitter user @_annarebecca is such a stark example of this perspective it should be in a textbook. The replies to her made me want to throw something at a wall.

She shared a screenshot of an Instagram DM notification from a guy named Dan, in which he wrote, “Hey this might seem a bit odd but I done your blood test the other day at the hospital, and I thought you were good looking and seemed nice so here I am shooting my shot.”

She captioned it, “Hello HR is that you.” 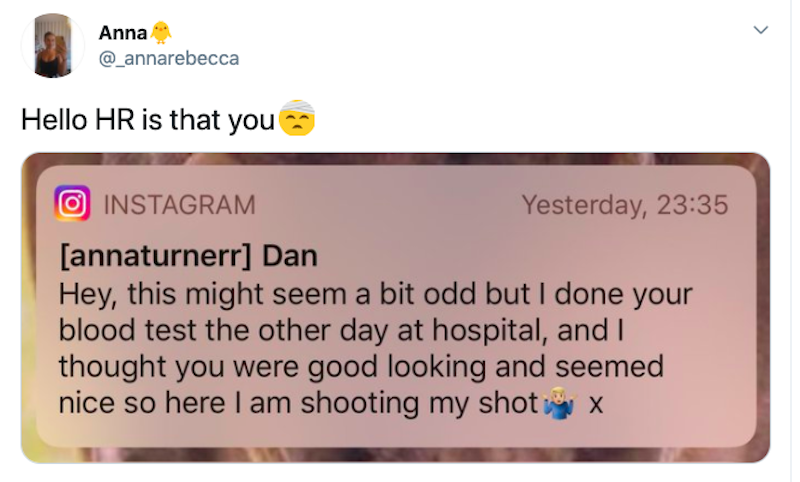 Yes, a guy who drew her blood is actually hitting on her via her Instagram days later, meaning he did some kind of spying on her, possibly looked up her medical records, and now thinks this is an appropriate next move.

To be absolutely clear, IT IS NOT. The man works in a hospital, which means what he is doing in that message is illegal no matter how politely worded. And if you’ve lived as a woman, you know that polite words don’t actually mean all that much when it comes to knowing someone’s intent. It’s not easy to reject someone who could potentially mess with your medical information or records. If she doesn’t report him, he has access, opportunity, and no one will know about it except her.

Just the same, some people said she’d be ruining the guy’s life if she did report this violation and that she would have liked it if he were cute.

I do not see an issue here, he was polite, not rude in any way, just reply an tell him your not interested, I presume this would have been okay if he was an attractive man??

Oh come on, it’s not really a bad thing. I bet that if your grandparents told you that was how they met, y’all would be like awwww that’s so sweet, he liked her so much he did everything to find her blah blah blah

i feel lik this is a compliment🤷🏾‍♂️yu can honestly find anyone on instagram and are we gon talc ab how it wasnt from requests? he was complimented her and if it made her feel uncomfortable could just block hom or just say no🤷🏾‍♂️its not that deep😂

The only problem I have with this, is if that man was attractive she would have thought this was so cute and romantic how he put in all the effort to find her. But because she doesn’t it’s “creepy” and Ik regardless it’s wrong for him to do that but it’s a 50/50 shot it’ll work

Thankfully, there were a number of people willing to step in and say that the reality is he is messing up his own life with his actions. Some of them were even hospital staff, who know exactly how it’s drilled into employees that this behavior is not okay:

I used to work in medical data informatics.

That’s a pure GDPR breach and he deserves firing for it.

Please report it to the medical centre.

The replies giving the girl stick for this are repulsive. A literal DOCTOR has completely breached data protection and the privacy of his patient to try and fire in to her and somehow she’s the one that’s done something wrong??

He got her name from her medical records. Her records that also have her address and her extremely personal details. All health care workers are told from the time they first start training that they cannot use patient data in this way. It is literally lesson number one.

This is terrifying. The creepiness, the social media stalking, the GDPR breach, the fact that your health could be at risk as a result of his unprofessionalism. I’m so sorry and I hope he gets exactly what he deserves.

I’m appalled at the number of people who seem to think this behaviour is both legal and ethically acceptable. It’s neither. They know they’re not supposed to do this, they own the consequences, nobody but them has ruined their life/job when they get reported for it

He got her name from her medical records. Her records that also have her address and her extremely personal details. All health care workers are told from the time they first start training that they cannot use patient data in this way. It is literally lesson number one.

Thank you! That’s exactly it. It’s predatory behaviour from one of the people who should be caring for you… completely unacceptable

If they lose their job, that is 100% their fault for breaking confidentiality rules that are painfully clear from the start. You are not responsible for the consequences of this person’s actions.

Anna eventually posted that she chose not to report Dan, but they talked and he “knows it was wrong.” She also said she’s received a ton of hate for her tweet:

Disclaimer we’ve spoken he’s not getting fired, he knows what he done was wrong. The amount of abuse I’m getting id rather not report. If this was your sister or daughter or cousin in my position imagine how you’d feel if they got some of the messages I’ve received.

I’m not looking to end someone’s career, I’m not. After the out burst of this tweet I’m not even sure o want to tell on him. It’s just a level of privacy that has been invaded is personally worrying.