DNA tests like 23AndMe are all the rage right now. People are excited to find out exactly what nationalities comprise them, sometimes learning that their ancestors weren’t who they thought they were. One cool thing about the tests is that they shed light on a person’s family history and sometimes even help people find relatives they didn’t know they had. Only, in this case, that didn’t turn out to be such a good thing at all.

A Redditor whose user name, AccidentalxIncest, (uh-oh) sort of spells out the problem, posted in the TIFU subreddit about how his girlfriend bought them both 23AndMe kits for Christmas.

I’ll let him take from here:

Throwaway, obviously. I also made the same post over at r/23andme.

I just found out a few hours ago and my girlfriend and I are currently a mental wreck.

My girlfriend (I’ll refer to her as Sarah) and I have been dating for a little over than a year and our relationship has been going very well. We both happen to come from the same town and met each other in college after being introduced by a mutual friend of ours.

Here’s where the FU begins to unravel

Last year for Christmas, Sarah decided to come over and stay with me at my apartment for the holidays. I also had decided not to go home for the holidays either. Plus, all my other roommates were back home visiting family, so we had the whole place to ourselves. It was perfect.

Christmas day rolls around, and Sarah had bought the both of us 23andme DNA kits. The thing is, is that we were both conceived by in-vitro fertilization via sperm donors. Both of our fathers were infertile so our parents had no choice. Deep down, the both of us were hoping to find our biological fathers through the service.

Okay, so both of them are looking to find their birth fathers.

Fast forward less than a month later to today, and both of our results are in. Sarah comes over to spend the weekend and we go through our results together on our laptops. We compare our ancestry and health reports and nothing seems off. I even found out I’m 2% Native American. All was well until we arrived at the “DNA relatives” section…

Sarah tightly holds my hand and says “I hope we both find our fathers”. Then I open mine up….

Sarah starts hysterically laughing and tells me to stop joking.

I don’t react to anything she says, and just stare at my screen in disbelief.

I then abruptly grab her laptop and open up her “DNA relatives” section. We see the same thing. My name at the top… “27% DNA shared…half-brother”

At this moment my brain just completely short-circuits…..

I’VE BEEN HAVING SEX WITH MY HALF-SISTER. HOLY FUCKING SHIT. WTF

What a complete nightmare.

My mind starts going a 100mph and I began hyperventilating, going into a state of shock. I can’t even remember what Sarah was doing at this time.

It’s pretty self-explanatory by now, but for those of you who don’t understand how we could be related, it turns out our moms were probably both fertilized by the same sperm sample. What are the fucking odds, right? The fact that we’re from the same town certainly increased the odds but still.

6 hours later, just typing this entire post makes my body shiver. There are no words I have to express what my mental state is now. To put it in simple words: I feel traumatized. Part of me still won’t stop thinking about how much I love Sarah and then I realize our entire relationship was incest. I honestly feel disgusted standing in my own skin. I’ve even been contemplating suicide.

Sarah and I haven’t talked at all since going into shock.

Right as I’m finishing up this post, Sarah has grabbed her stuff and left my apartment a few moments ago.

I’m probably not going to respond to any of your comments/questions for now and I honestly want to be left alone in the corner of my room. I really just needed a place to vent all this.

He added a “Too Long; Didn’t Read” summary of the situation at the end of the post.

TL;DR: Former gf and I are both sperm donor babies and come from the same town. We take a 23andme DNA test and find out we’re each other’s half-sibling. Meaning I’ve been having sex with my sister for over a year. Turns out we both were conceived from the same sperm sample, go figure.

I do not give permission for my post to be used in the making of any movie, story, book, etc.

He also added three edits. The first said that he was getting support from friends and the second thanked Reddit for giving him support.

EDIT: My mates just came home and are giving me support.

EDIT 2: RIP inbox. Thank you all so much for the support. I just logged back in and didn’t really expect this post to blow up. Last night was rough. Sarah’s friend/roommate called letting me know Sarah was home. As of now, Sarah and I still haven’t talked. But after an night of thinking, I believe I’ve come to terms with what we’ve discovered. For those of you who still think this is fake (I honestly wish it was), here’s a screenshot showing our shared DNA (https://i.imgur.com/Z0zm9xi.png). I think the best way for Sarah and I to heal is to go back home (our town) and see how this all began with our families. Only then will we be able to accept the reality. I’ll post more updates as things develop.

The third edit included proof of the DNA results, for anybody who thought he was making this up. 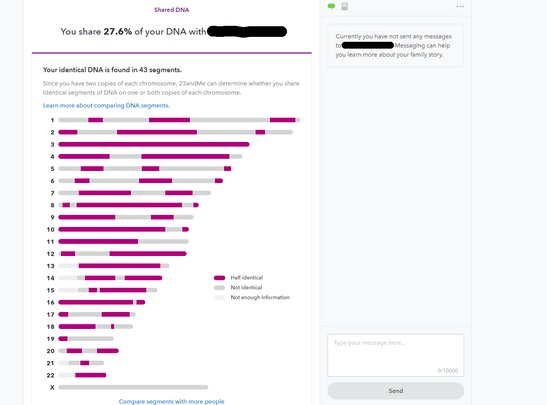 Redditors did offer lots of perspective advice, which might have been at least a little helpful.

It’s understandably a pretty traumatic experience, so I think it’s best that you and your girlfriend have some time apart.

However, at some point I would recommend two things: 1. Talking to her about the results and, 2. Getting a second test done by another reputable service or medical provider. Your family doctor may even have a recommendation.

As you said, this is a pretty phenomenal circumstance. Before making any sort of long-term, final decision about your relationship, verifying the test results should be a priority.

Maybe I’m just too open minded but I don’t think you did anything wrong or disgusting. I mean it’s not like you’re actual brother and sister that grew up together.

Not saying I’d just continue or anything, but I can’t see how you could’ve known or prevented this so keep your head up ?

No children, no harm done.

Imagine you got to the point in life you decided on having kids and found out then. Compared to that this is a very happy ending and you both dodged a bullet.

What’s disgusting about incest is having a romantic/sexual relationship with someone you’re so intimately related to that you grew up with each other from birth.

In this instance they’re only half related, and likely had completely different upbringings in completely separate families. Genetically it’s still not a great idea, but morally and ethically I don’t think there’s anything here to worry about.

Well, this is quite a sticky situation. Hopefully the Reddit poster and his girlfriend/half-sister figure stuff out in a way that doesn’t leave anybody any more traumatized.

If you're wondering where to find funny pictures on the Internet? Wonder no more. Ruin My Week is a place where you can escape all of the noise and negativity out there with funny pictures, funny photos, funniest tweets, funny stories and really anything else you need to keep you laughing.