Having sex is a world away from being in a relationship and being in a relationship is a world away from co-parenting a child together, but sometimes all of the things collapse on top of each other and it gets hard to separate them. This is a rare occasion where an r/AmItheA**hole post seems to suggest the poster is a massive a-hole, yet I kind of agree with them. With LOTS of caveats.

Redditor u/Ornery-Occasion3765 posted his story: “AITA for not letting my girlfriend move in with me despite her being pregnant?”

He says he and his girlfriend were together eight months when she got pregnant. She’s 14 weeks now (do the math, they have been together nearly a year), and “has decided to keep the baby.” He doesn’t say it, but it’s implied that would not be his choice. Here comes the issue:

I still feel that our relationship is too new for us to move in together even though we’re going to be parents. I like her a lot and can see a lot of potential for this relationship, but I’m just not sure yet where I see us long term. Moving in together doesn’t feel right at this point.

I’ve communicated my feeling that we’re moving too fast to her, and she was disappointed. Part of the reason why she wants to do this is because it will be easier to take care of the baby if we’re living under the same roof when the time comes. It also means we don’t have to get two if everything so each place can have a nursery/place for our baby.

Oh jeez. The OP says he’s surprised that he’s gotten more criticism from his parents and sister than his pregnant girlfriend:

He says that his friends also think he’s an a**hole:

I think they don’t appreciate how new this relationship is and moving it forward simply because we’re having a child is a terrible idea. Sure, it will require more planning to make this work but it’s not impossible.

I think in this case everyone has massively overreacted and unfairly labeled me the a**hole. 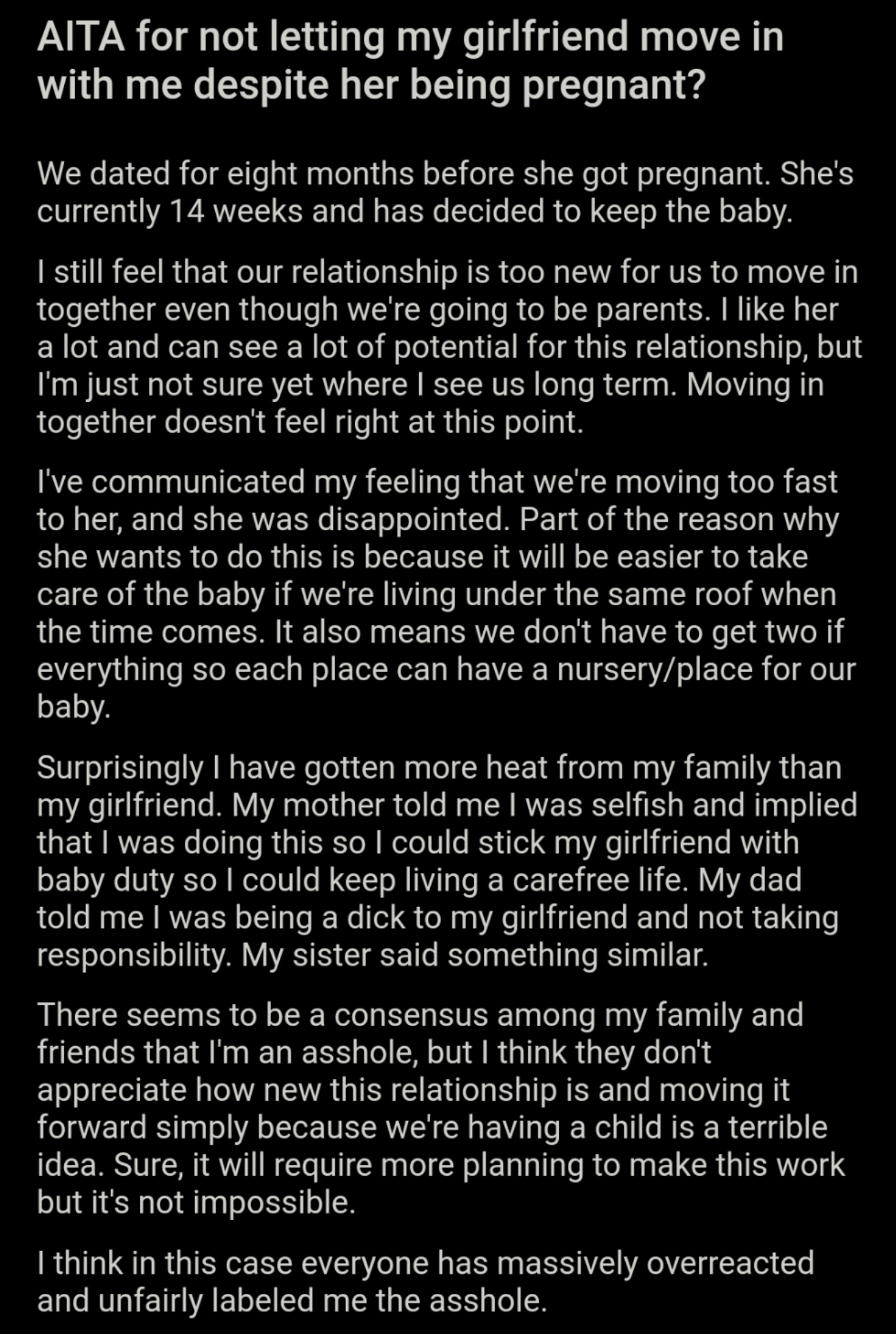 Just to answer one immediate question, he said in a comment he didn’t wear a condom.

The OP has been ruled a major a**hole by everyone in the comments. Many people seem to think that having sex means consequences. The ship has sailed etc. Personally, I think it’s weird that people still think of children as a “punishment” for having sex. They are a potential responsibility, which is why it’s a very good idea to talk to the people you’re in relationships with or having sex with about what they’d do if you got pregnant. It’s no guarantee of anything, but it’s a pretty big step in communication.

But spilt milk, no crying: 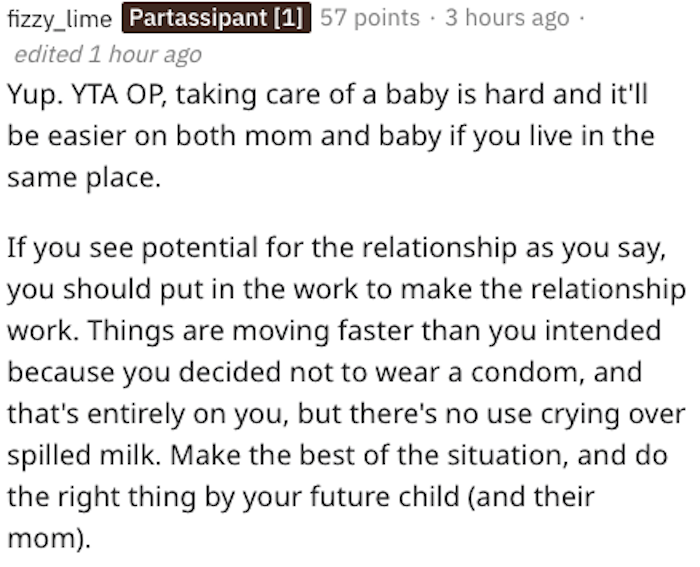 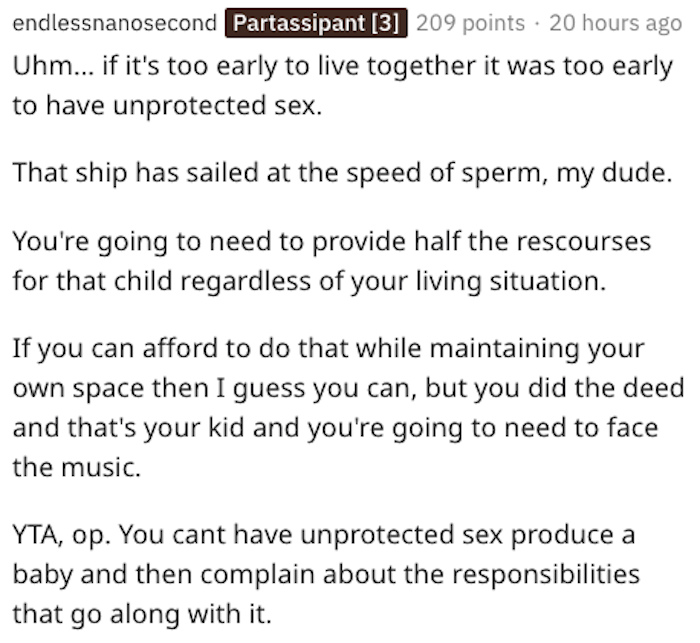 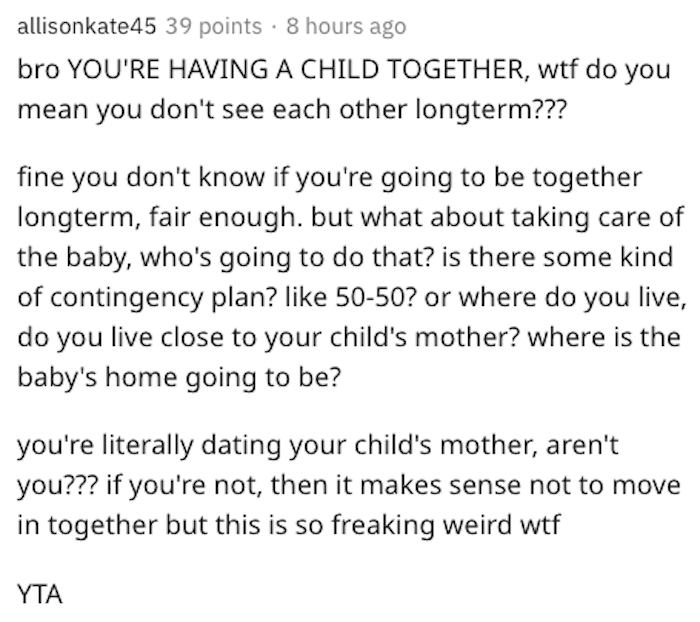 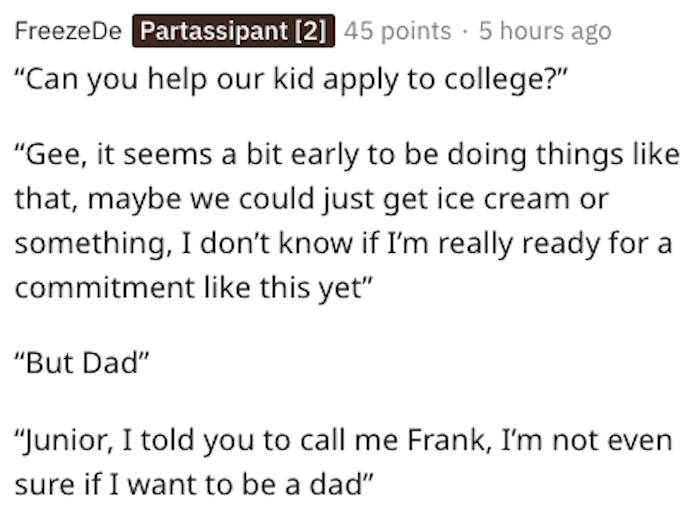 The OP claims he is doing the work of being a good parent in every area except living with the mom and actually caring for the child with her:

But this basically cuts to the heart of the issue; it’s about what is best for the kid now: 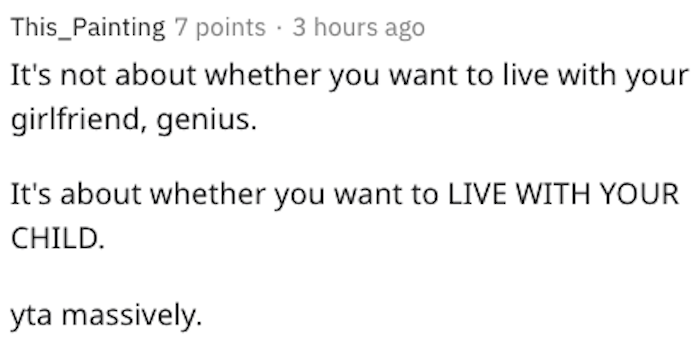 This may be controversial, but I agree with the OP up to a point—living together when you’re not sure about the relationship isn’t a good idea! It will get more complicated later. However, if you are with someone and you care for them, refusing to be there for her right after pregnancy and throughout your kid’s formative years is definitely the way to end the relationship. Usually, when people with kids break up and live separately, one of them pays child support. The OP’s parents are probably right to suspect he’s trying to have his cake and not pay for it, too.

So yeah, YTA. Hope she dumps you and lawyers up.