The Internet is a place where the moment you post something publicly, you’re vulnerable of having it screenshot and shared with the entire world. Maybe you wanted to say something to a loved one that was super-secretive and sexual, but you accidentally put it publicly.

Well, if you’re a celebrity, you should figure out how to use the ‘Direct Message’ feature on social media, because we caught plenty of celebrities red-handed this year being extra thirsty on the net. I mean, super perverted and raunchy. Not that we’re hating, but, it’s hella entertaining.

1. Michael B. Jordan thirsting over Lupita Nyongo on Twitter.

The two starred in the hit film Black Panther together, but, there were rumors circling that they were also dating/having a mini-fling. No one was 100% sure, and when this tweet came out, people were shook. Turns out, it had to do with a “push-up” contest they were having and not sex. Sad.

2. Cardi B sharing her anniversary plans for Offset.

Now, we know Cardi B is open and candid about her love life, but when she got pretty raunchy on Twitter about how good she was going to give it to Offset for their anniversary, everyone was left with their jaws on the floor. A true queen.

And they say chivalry is dead. #CommentsByCelebs

Rapper 21 Savage and Amber Rose were dating for a short period of time. And, when they were, he wasn’t afraid to thirst in public over photos on Instagram—like calling her throwback photo “hot and ready like a lil cesars pizza.”

No you didn’t, @katyperry. #CommentsByCelebs

Katy Perry and Orlando Bloom have been dating on-again, off-again for years. But, when he posted a movie poster promoting a project, Katy decided to be cheeky and ask for a “season pass for that ass.” She then said she meant to send it privately, but we all know it’s not true.

5. Gwyneth Paltrow thirsting for some D.

They don’t call it a cocktail for nothin @connorkrill @vtammm

An Instagram account made this hilarious meme of Paltrow and shared it online. Once her friend got ahold of it, he commented and tagged her—

To which, she totally said “ain’t that the truth,” which means Paltrow was thinking about some c*ck the entire time. We see you, sis.

7. Pink accidentally got drunk and emailed Eminem a “love letter.”

Pink revealed in an interview that while writing her 7th studio album, Beautiful Trauma, she wrote a rap on one of the songs and wanted Eminem to hop on the album as a feature. She then said she got wine-drunk and emailed him a pretty telling love-letter saying:

8. Ariana Grande tweeted about the size of Pete Davidson’s d*ck.

Ariana Grande and Pete Davidson may have had a short run, but it was a hella eventful one for sure. Between their PDA and over-sharing on social media, the two left everyone placing bets on when they’d break up. But, prior to her album dropping and prior to Thank U, Next, Grande let everyone know about Pete’s dong.

Grande has posted a clip of a song from her album…

When fans asked Grande to share what the song was about, she told them it was about Pete (which, sucks now that they’re over and she’ll have to sing the song on tour forever). 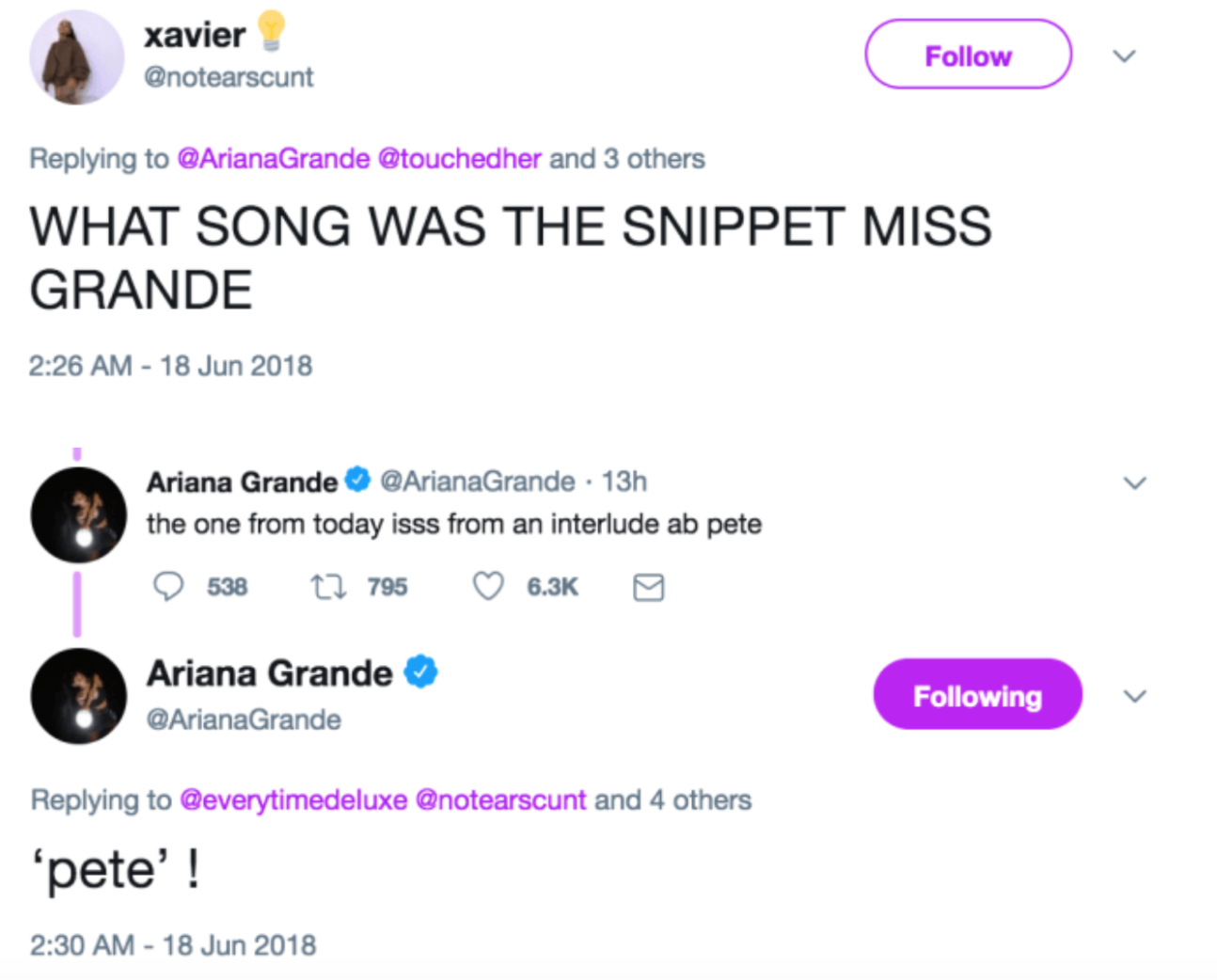 And, when they asked how long ‘Pete’ was…she said:

Well, damn girl. Sucks that you lost all that. Just kidding, you’re better off (get it?!?)

9. Tom Brady revealed that he likes to eat ass.

After Barstool shared this photo on Instagram, Super Bowl quarterback Tom Brady got involved in the commentary.

As soon as bae gets out of the shower #AssEatinSZN @barstooloutdoors

Lucky Giselle, am I right?

10. Jessica Biel claimed Justin Timberlake, too, has a dig bick.

The adorable couple, who have been together for years, had some sweet, sexual banter on Instagram when Timberlake posted about his book.

Doing work… on my book. Pre-order in the link up top. #Hindsight

And, Biel responded rather playfully, insinuating that she’s in awe of his big…brain.